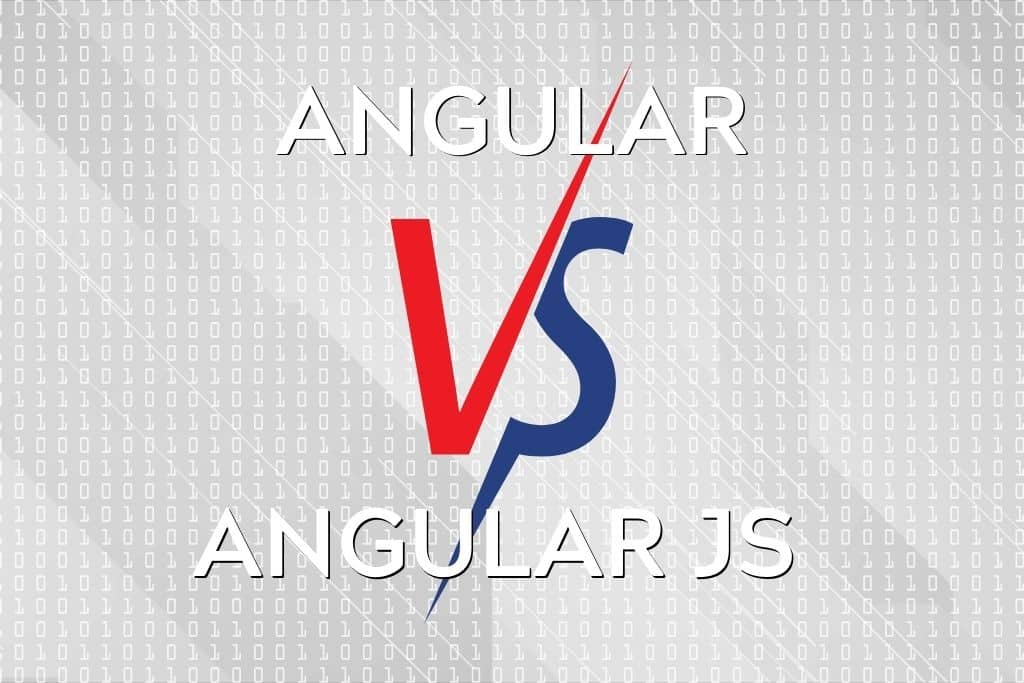 Angular is one of the most popular frontend frameworks in use today. But believe it or not, there are still websites using AngularJS. These are legacy sites, and the developers may not feel the need to learn an entirely new framework for a site that isn’t all that big.

When comparing Angular vs AngularJS- what is the difference? Both are frontend frameworks that use the Model-View-Controller (MVC) architecture, but Angular is a complete rewrite of AngularJS, using TypeScript instead of JavaScript. Angular favors an object-oriented programming approach and has static typing which makes it ideal for large-scale projects with lots of data, plus it’s a more mobile-friendly framework.

AngularJS has very few advantages over its successor. For one, it is easier to learn if you come from a JavaScript background. AngularJS is also decent enough as a prototyping tool because of its declarative syntax and lightweight nature.

When you see “Angular” instead of “AngularJS”, know that the version being referred to is 2.0 or above. Every Angular version since 2.0 has been referred to as “Angular”, while version 1 and its variants are called “AngularJS”. Angular is a rewrite of AngularJS in TypeScript instead of JavaScript.

It was created by the same Google team that worked on AngularJS, as a forward-looking replacement for the old JavaScript framework. As a result, Angular comes with certain improvements over its predecessor. Like support for mobile devices, dependency injection, a component-based design, server-side rendering, lazy loading, etc.

All of these improvements make Angular a superior framework in terms of code reusability, scaling, maintenance, security, and performance. Version 2 was initially announced at the ng-Europe conference in October 2014, and got a Beta release in December 2015. The proper public release of Angular 2 was made on September 14, 2016.

Every version since then has been called Angular, while Version 1 and its derivatives have been moved into their own separate sphere. A team at Google takes care of development for Angular, constantly releasing new features and patching up issues. Because the framework is open source, several third-party libraries and plugins are available.

Here’s the interesting thing- before Angular 2, every version was just called Angular. But then, things got very confusing with the reworked framework. Both the developers at Google and the people using Angular for their projects needed a clearer method to differentiate between the old and new frameworks.

So, the old JavaScript version got a “JS” suffix. Making it “AngularJS”, while versions 2 and above are called “Angular”. Official support for AngularJS ended in January 2022, so it won’t get any security or performance patches. The code for its latest release can still be found on repositories such as GitHub.

And it’s in an archived state which means no changes can be made. For those who want continued support because their legacy website still uses AngularJS, there is XLTS– Extended LongTerm Support. This is a fork of AngularJS developed and maintained by former team members from Google.

The license and contract for this fork are maintained by the XLTS team, who plan on supporting the framework through December 2026. Despite its many shortcomings compared to Angular, AngularJS is still a decent little framework for quick prototyping tasks. However, it lacks a CLI which means developers have to spend more time configuring external dependencies for things like debugging and testing.

Both Angular and AngularJS are Model-View-Controller frameworks. MVC decides the application structure and data flow, it’s a development paradigm with three interlocking layers.

There’s the model which contains logic and exposes application functionality to the other layers. Then, there’s the view which renders a visual representation of the data provided by the model. Finally, there’s the controller which receives input and transforms it into commands/ data.

All three layers are linked to each other. The model transfers data to the view, while the view can send requests and updates to the model and controller. Using the MVC architecture allows for the separation of concerns on the server end.

It abstracts the UI from the logic allowing for more efficient parallel development. Angular is a more complete implementation of the MVC concept, thanks to its use of components. Each component in angular acts as a building block.

It combines TypeScript logic and HTML templates into one reusable block. The DOM in an Angular app or website is built from a hierarchal tree of components. In Angular, components are a subset of directives and always contain an HTML template.

In addition, components have CSS selectors and styles. To manage component behavior, directives are used. Attribute directives can change the appearance and behavior of a component or another directive.

Structural directives are used to edit the DOM by adding or removing elements. Components and directives help generate the view on a user’s screen. This view is the UI on your device and can contain things like buttons, forms, graphics, menus, tables, etc.

In AngularJS, a pack of directives does the job of components by enabling code reusability. Components do exist in AngularJS, but in a different form.

In AngularJS, components are treated as a special type of directive with a simpler structure compared to normal directives. Scope and controllers are used to control the flow of data, and bind the various layers together (model, view, controller).

Angular shifted a lot of its functionality into modules, creating a lighter core. This results in faster speeds compared to AngularJS.

Angular takes a lot of features from its predecessor and either improves these through new implementations or adds new ones on top. For instance, take the syntax for binding data between view and model. AngularJS requires the ng-bind directive while in Angular you use “()” for event binding and “[]” for property binding.

There is usually a dependency consumer and a dependency provider. Angular uses an Injector object to connect these two. Through dependencies, you take services from one part of your application and provide them to another part.

Angular has a Command Line Interface (CLI), which makes the process of creating and maintaining applications really simple. Through the CLI, developers can get access to several functions right from a command shell. These include analytics, the creation of components, testing, deployment, etc.

There is no CLI in AngularJS, so developers have to rely on external tools for similar tasks. Angular is also designed from the ground up to support mobile browsers. In comparison, AngularJS has far worse mobile support.

Angular uses a component-based architecture, whereas AngularJS relies on its directives. Both can be used to create large-scale apps that process tons of data, but Angular has the edge in terms of speed and modularity. Plus, Angular code is easier to manage as the app scales up.

That’s because it uses components and has dependency injection. In comparison, AngularJS relies on scopes and controllers to manage the data flow between elements. Both frameworks support two-way data binding.

AngularJS was initially released in 2010, and back then mobile browser support wasn’t as important as it is today. Smartphones in general were still in their nascent phase, and developers were figuring out what could be done with these new devices. In comparison, the first Angular (version 2) came out in 2016.

By then, having websites and apps that run well on smartphones was the industry trend. Hence, Angular webpages work better on mobile devices. It is also better suited to creating single-page applications since it has more efficient routing.

Angular is an evolution of AngularJS and offers far better support for modern browsers. It has features like a CLI and dependency injection that aren’t found in AngularJS. Plus, the core of Angular is lighter which makes it faster than AngularJS.However, there is still a place for AngularJS in modern web development and that’s why the XLTS project exists. It is not the best framework for a new web app. But existing sites that use AngularJS can still be optimized to look as good as new sites created with Angular.