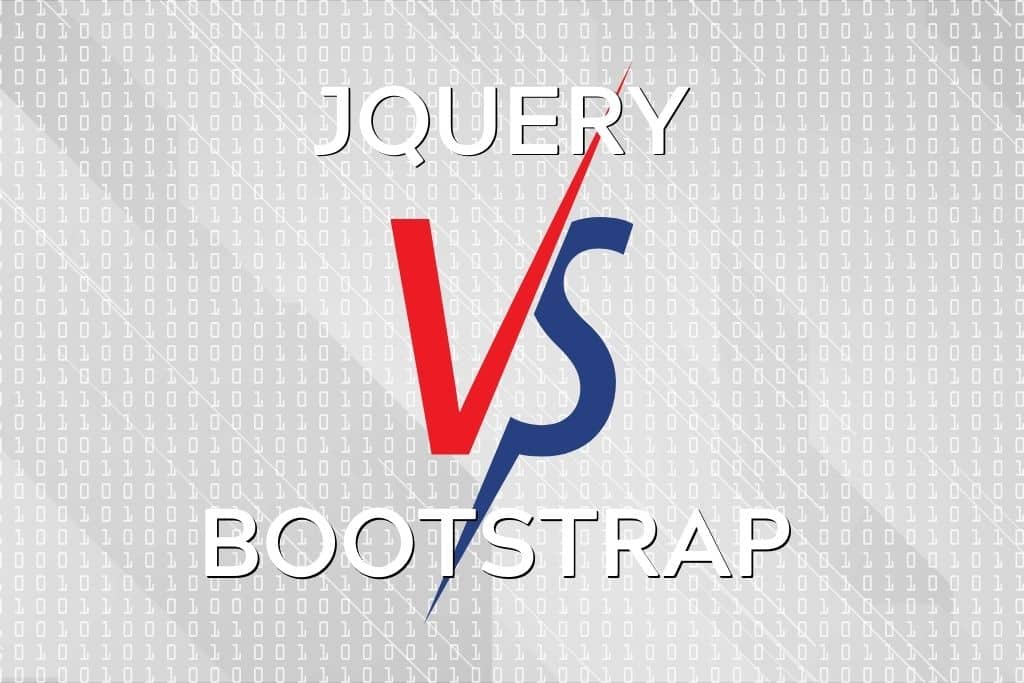 If we’re going to talk about jQuery vs Bootstrap, what is the difference? jQuery is a JavaScript library that simplifies scripting and DOM manipulation, while Bootstrap is a mobile-first framework for creating responsive sites and web apps. While jQuery simplifies JavaScript implementation within a website, Bootstrap simplifies CSS implementation.

Both jQuery and Bootstrap are open source, but not interchangeable. These are two separate tools that fulfill very different roles on the front end, with one being a library while the other is a framework. In layman’s terms, jQuery helps developers deal with the “structure” of a website while Bootstrap deals with the “style”.

One thing is for sure- jQuery is old. It was initially created in 2006 by John Resig who wanted a JavaScript library that would simplify mundane and repetitive tasks. Reduced syntactical overhead allowed web developers to create interactive functions for their pages and prototype ideas in a short time period.

Selecting a type of element based on its id or class became a lot simpler with jQuery. Over time, jQuery’s selection engine came to be known as “Sizzle”. Today, jQuery is managed by a talented network of developers from around the world who maintain and update the library.

In the early days, jQuery fulfilled an additional function on top of its HTML DOM manipulation- the abstraction of differences between browser engines. In the 2000s, browsers didn’t follow JavaScript standards as strictly as they do today. As a result, the same bit of code could produce different results (or not work at all).

With jQuery, developers were drawing from a predefined library of JavaScript code that was maintained by a team of developers. Hence, the compatibility issues were much more likely to be smoothed over or rectified. Over time, jQuery’s development became much more organized through the foundation of the jQuery Board in 2011.

Tasked with managing and advancing the internet’s most popular JavaScript library, this board created the jQuery Foundation in 2012. The jQuery Foundation functions like an executive branch of the board. It provides documentation, communication channels, and advice to concerned developers.

Over time, interest in jQuery has dropped. But this is not due to the library being discarded by developers, as it is still used by 77.4% of all websites. Modern front-end web developers have access to better, more powerful tools like Angular and React.

On top of that, jQuery dependency has been dropped by Bootstrap, starting from version 5. GitHub also decoupled jQuery from its front end, because the old library didn’t provide enough value in the context of modern web standards. A lot of new websites choose to skip jQuery altogether, in order to avoid future dependencies and go with a more modern framework instead.

Bootstrap started out as a side project, conceived by two individuals at Twitter in the middle of 2010. Initially, it was called “Twitter Blueprint” as Mark Otto and Jacob Thornton were creating it to simplify prototyping and blueprinting within the company. Over time, the project transformed into a flexible framework that could be used to design cool-looking interfaces.

While developing Bootstrap, a big focus was placed on consistency. Prior to the framework, developers would mix and match separate libraries to create their UI which resulted in an inconsistent user experience across devices. This also increased the amount of time it took to maintain code and fix bugs.

Bootstrap was released as an open-source project in August 2011. Since then, it has been maintained by a small core team of developers in coordination with a global community of enthusiastic supporters. Over time, Bootstrap has gone through several updates that have added new features and better support for modern browsers.

To give developers a head start, Bootstrap includes several HTML and CSS design templates. These include everything from buttons and forms to tables and menus. Bootstrap also allows users to customize these templates based on their requirements.

Bootstrap’s grid-based layout is at the core of its design. Developers place the elements for their UI into a grid layout which automatically adjusts itself based on the client’s screen size. This means that viewers get a consistent experience irrespective of the device they’re using- mobile, tablet, or desktop.

The jQuery library isn’t a direct competitor to Bootstrap. In fact, both of these tools can be used together on the same website. But for developers who want an alternative to Bootstrap, there is the jQuery UI library.

It comes with a selection of widgets and prefabbed interactive elements. There is no grid function, nor is the library optimized for responsive and mobile devices like Bootstrap. However, it is a neat option to have for those who are familiar with jQuery and already use it on their websites.

Bootstrap is used by 21.7% of all existing websites, while jQuery is used by 77.5% of all websites. Bootstrap is a more popular tool for new websites, due to its mobile-friendly design that ensures consistency across a wide range of devices. In comparison, the jQuery library isn’t as relevant within a modern context since alternatives like Angular and React exist.

HTML DOM manipulation is the primary use case for jQuery. Hence, it is still used in smaller projects that don’t prioritize long-term maintenance or scaling. Implementing basic interactive elements within jQuery is quite easy for anyone who is familiar with JavaScript.

The library itself doesn’t take very long to learn. Plus, there is still a lot of jQuery integration in various WordPress themes. And WordPress is the world’s most popular content management system, used by 43.1% of all websites.

In comparison, Bootstrap is a more modern framework that is used by several popular websites. Some examples include Apple Maps Connect, Fox News, Reuters, and Spotify. The responsive, grid-based layout of Bootstrap makes it easy for developers to implement ideas quickly.

Under the hood, jQuery is basically a bunch of JavaScript code that runs whenever you call one of its functions. It simplifies repetitive tasks that involve selecting, modifying, and deleting elements on the DOM tree. There are various modules within the jQuery library.

The core deals with HTML DOM manipulation, while other modules handle things like AJAX calls and animations. Plus, there are several user-created plugins that can be imported to improve jQuery’s functionality.

There are plugins for editing images, compressing/ decompressing files, implementing menus and tables, etc. Because the library has been around for so long, it has attracted a large community of contributors. There is extensive documentation on every aspect of jQuery, with enough plugins and effects for every type of website.

And Bootstrap is no slouch in terms of documentation either. It also has a large community of dedicated developers who constantly fix issues, update documentation, and implement new functionality with plugins. There are Bootstrap plugins for forms, menus, image galleries, maps, and more.

Bootstrap and jQuery share many overlapping qualities. Both are easy to pick up and use for beginners, provided they have basic JavaScript and CSS skills. Both are also designed to simplify web development.

It also has functions for basic effects and animations. Selecting elements by id, name, class, attribute, or type is very easy in jQuery. In fact, it is one of the main reasons why this library is still used.

jQuery also allows developers to chain commands, running multiple methods on the same element (or collection of elements). Bootstrap fulfills a different set of tasks, mostly related to UI design. Hence, its feature set also varies from that of jQuery in this aspect.

Since Bootstrap is a framework, it comes with a bunch of templates that include buttons, menus, navigation bars, etc. for various types of websites. Users can pick and choose components to include within the grid-based layout. Bootstrap components automatically adjust themselves to fit well on the screens of all devices, ranging from phones to desktops.

Bootstrap is quite popular within its niche, which is frontend UI design. It is currently used by 26.6% of all websites with known JavaScript libraries. Some of the most popular sites to use Bootstrap are Baidu, Xinhuanet, Spotify, and American Express.

The comparison between jQuery and Bootstrap isn’t direct since they tackle different aspects of web development. While jQuery is a JavaScript library for DOM manipulation, Bootstrap is a front-end UI development framework. One helps reduce the amount of JavaScript code, while the other is instrumental in creating responsive and mobile-friendly interfaces that run consistently across a multitude of devices.