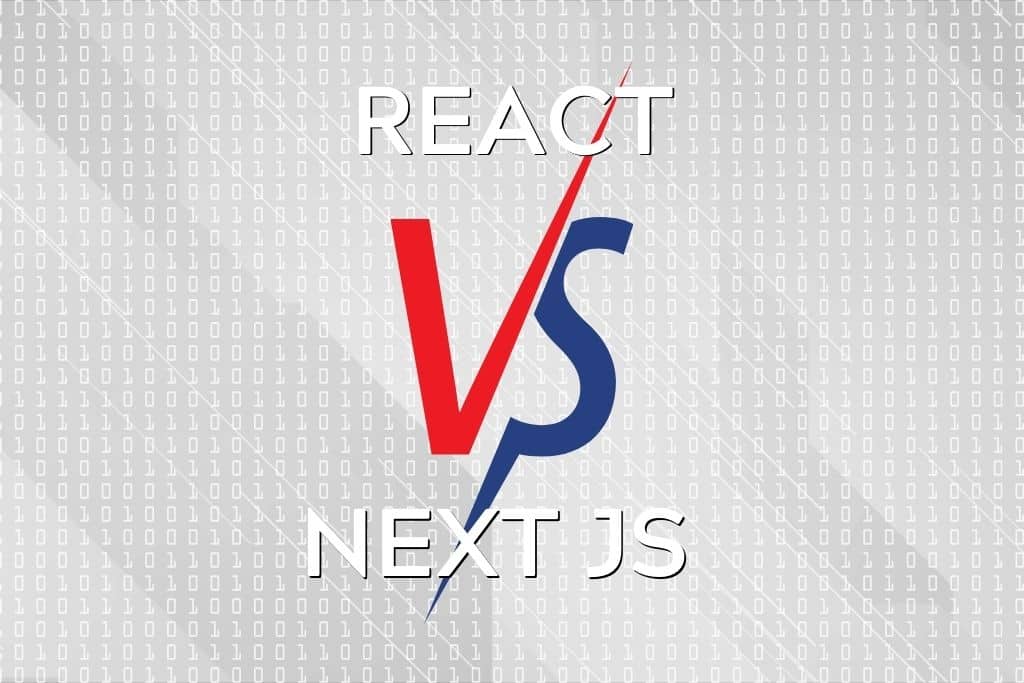 Developers often have to choose between multiple similar tools, picking one with features that are uniquely suited to the job they’re doing. So even though Next.js is based on React, it is used differently. Sometimes, both are used in combination with each other to create interactive frontends.

Talking of React vs Next Js- what is the difference? React is an open-source JavaScript library used to create reusable UI components with a focus on the “View” layer of MVC. Next Js is a production framework based on React that is used to create apps rendered on the server side.

You could say that comparing Next.js with Create React App is a more apt comparison since both are frameworks. However, Next.js is focused on server-side rendering which can improve performance by reducing the amount of JavaScript code a client device has to load. Crawlers also index the site quicker, which improves SEO performance.

The Origin Of React

React was conceived at Facebook as a solution to the troubles they were having with the newly launched Ads application. The number of users was increasing at a very fast rate, and engineers were having a hard time updating the codebase to keep things running smoothly. The need arose for a frontend tool that could be used to create reusable, easily maintainable code.

And that’s how Jordan Walke came up with ReactJS in 2011 when it was initially deployed to the Facebook News Feed. The precursor to React was FaxJS, a prototype library inspired by XHP- an HTML component framework for PHP. At the time, XHP was being used in the UI layer for Facebook Lite to create reusable HTML components that could be customized.

In 2012, React was used on Instagram. And in May 2013, the JavaScript library went open source. In 2015, we got React Native which is a framework based on React that’s used to create native mobile apps for Android and iOS, using JavaScript.

In the last few years, React has gone through several upgrade cycles. It got the Fiber reconciliation engine in 2017, which improves performance. React has also been adopted by several large international corporations such as Bloomberg, Discord, Skype, Airbnb, Walmart, etc.

The Origin Of NextJS

The core philosophy behind Next.js is static website generation through server-side rendering. This has several unique advantages over rendering the website within a client’s browser. Firstly, it works even with JavaScript disabled since the browser gets HTML code directly from the server.

It also improves loading times significantly and mitigates various security loopholes. SEO performance is also improved in some cases because crawlers can index websites faster. Next.js was conceived as an all-new React toolchain and released to the public in October 2016 by Vercel.

Due to its highly performant nature and virtual DOM system, React is an excellent choice for web apps that need to update the view frequently. It is also good for scalable apps and websites due to the use of reusable components and one-way data binding. In contrast, Next.js is more of an all-rounder.

It can be used for a more varied set of tasks because of its support for server-side rendering and easy state management + routing. Project configuration and deployment times are also reduced with NextJS. And it also carries SEO benefits.

Next.js is used for prototyping, creating MVPs, software as a service, single-page applications, enterprise applications, etc. Speed and security are the cornerstones of NextJS development, which is why it’s the framework of choice for Jamstack websites. Next.js is also very developer-friendly with features such as Fast Refresh (similar to hot module replacement), incremental static regeneration, and zero-config.

React uses a declarative programming paradigm, which means you tell the code how you want your view to look rather than what it should do. In layman’s terms, this is just an abstraction layer that separates the logic of a program from its control flow. A similar system is used Next.js since it’s based on React.

However, things like routing are much simpler in NextJS which uses a page-based system. Any file added to the page directory is automatically available as a route. Configuration, testing, and deployment are also much easier with NextJS which includes tools for all the aforementioned tasks (unlike React, which is a library).

React can support server-side rendering like NextJS, but it requires the installation and configuration of certain dependencies (like Babel). The process is much more seamless with NextJS. And it also contains some unique features like image optimization, incremental static regeneration, etc.

There are several features that make React stand out, such as reusable components, one-way data binding, virtual DOM, etc. And many of the same features are also carried over to Next.js, with some extras sprinkled on top. For instance, Next.js has better built-in CSS support with Sass, SCSS, CSS-in-JS, etc.

There are also features that make a developer’s life much easier. Such as fast refresh, which allows you to see the results of any changes made to React components within Next.js almost instantaneously. Another excellent feature of Next.js is ESLint integration which helps you find and correct issues with your JavaScript code.

React is regarded as one of the fastest JavaScript libraries out there, and Next.js borrows from the same codebase. With features like server-side rendering, image optimization, and incremental static regeneration, Next.js can be even faster than React depending on the type of application you have.

For a browser, displaying preprocessed HTML  is far quicker than running client-side JavaScript in its engine. With static generation, HTML generated during build time is simply reused upon each request (with incremental updates depending on interactions). A hybrid approach can also be taken, with some parts of the page generated by JavaScript on a client device (client-side data fetching).

React is a more popular frontend tool compared to Next.js, but a lot of that comes down to simplicity and scope. React is inherently focused on the “view” layer of MVC, and is a relatively lightweight library when you consider the amount of stuff it does. React is quite simple to learn for anyone with a basic understanding of JavaScript, HTML, and CSS.

Comparatively, Next.js is more rigid in its structure (more opinionated than React). It also requires you to know React beforehand (hence people learn React first, and then Next.js). Next.js also has less extensive documentation since it is newer and less popular.

While React and Next.js are related to each other and have many overlapping features, they are ultimately two different things. React is a library and NextJS is a framework. This means that you get a more “structured” experience with the latter as it comes with built-in solutions for routing and state management.

While React can support server-side rendering, it takes a while to configure and execute. In contrast, NextJS comes with out-of-the-box support for static generation and server-side rendering. In the real world, React and NextJS are used together- React is used for the UI while NextJS helps with routing, integrations, and data fetching.