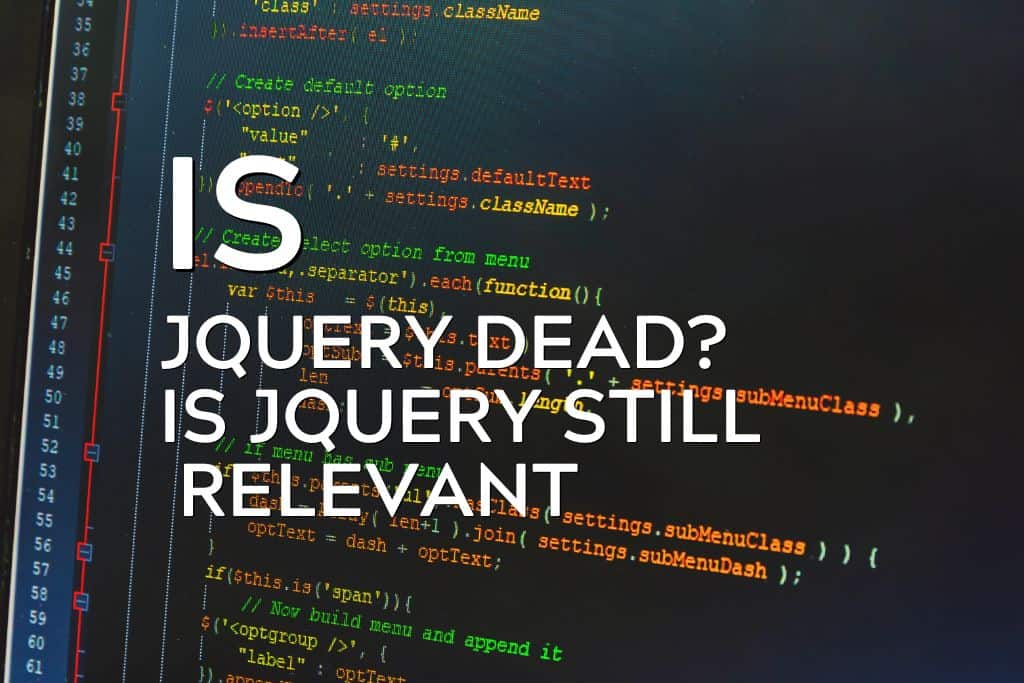 The motto of jQuery has always been “write less, do more”. It’s hard to argue with the fact that jQuery simplifies web design for anyone who isn’t a JavaScript expert. And even the experts will occasionally use jQuery to implement certain functions or widgets.

But is jQuery dead? To understand if jQuery is still relevant or used in 2022, we can take a simple look at the statistics. According to Wappalyzer records, over 80% of webpages still use this library which is conclusive proof that jQuery is far from irrelevant despite its legacy code.

Sure, React and Angular offer more powerful tools in certain areas of web development. But they also work in very different ways and are arguably tougher to learn when compared to jQuery. Most arguments against implementing jQuery in new projects originate from the fact that native JavaScript has become more robust, thus diminishing the need for jQuery.

This one is slightly more complicated than a simple yes or no answer, so let’s take a deep dive into what made jQuery so popular in the first place. Back in the day, browsers didn’t have any built-in methods to make easy CSS selections or AJAX requests without refreshing the page. But new advances in native JavaScript and CSS have borrowed many of jQuery’s popular features.

Another thing jQuery had an advantage in, was the simplicity with which you could do animations. Even if you didn’t know much CSS, you could use basic methods such as “fadeIn()” and “slideDown()” to create all sorts of visual effects. However, these things have been built into CSS ever since version 3.

Finally, jQuery was used to make AJAX calls that required one line of code and worked across all browsers. Now, this too has been implemented within  JavaScript. It’s clear that much of what made jQuery so popular 15 years ago, is now built into native JS.

Much like jQuery, React is an open-source JavaScript library for frontend use. However, it’s more focused on UI design (and was initially created by Facebook). React allows you to easily manipulate DOM elements just like jQuery, but does so via a “virtual DOM” that mimics the real thing.

Due to this virtual DOM, React is faster than jQuery (and also more efficient for mobile devices). It has a diff algorithm that compares new and old virtual DOM states, rendering view changes in real-time. In terms of flexibility and scalability, React beats jQuery- making it the library of choice for more complex projects.

React uses a component-oriented architecture with reusable code and an ever-expanding set of community-created features. For simpler websites, jQuery is probably just fine. But for web apps and larger projects that require scalability, you will want to go with React.

Is Native JavaScript Better Than jQuery?

jQuery gained popularity because it let you implement interactive features and styling that would otherwise require a lot more time and effort with native JS. Plus back in the day, you’d have to write different versions of the same JavaScript code depending on which browser you were using. This was especially true for Microsoft’s Internet Explorer, which just refused to comply with established standards.

But it’s 2022 and we’re living in a different era. Internet Explorer is gone, and JavaScript has undergone several revisions to comply with ECMA standards (particularly ECMAScript Version 6). Every modern browser can execute the same native JS code without any hiccups, which is one point against the necessity of jQuery.

But despite the improvements to native JS, you’ll still end up with more lines of code compared to jQuery. This means the decision is really up to you if you’re working on smaller projects with little complexity in the way. Modern frameworks like Angular and React take care of DOM manipulation so you can focus on aesthetics and logic.

This means you don’t have to focus on either jQuery or native JS if you’re just interested in DOM manipulation. But if you’re aiming to be a proper web developer, it’s crucial to learn and get a good understanding of JavaScript because you will only go so far with jQuery. JavaScript is faster and lets you understand concepts that will come in handy while learning stuff like React or Angular.

Is jQuery Worth Learning in 2022 | The Future of jQuery

You see, jQuery is incredibly easy to learn and implement in your projects. It only takes a couple of days to get all the methods down. However, it isn’t the most necessary thing in the web development world.

Especially when you consider the fact that alternatives such as native JS, React, etc. allow you to implement more complex and flexible solutions that also perform faster. Still, jQuery is used by an overwhelming majority of websites. So if you’re ever going to work on one of these legacy projects or do maintenance, you’ll come up against jQuery code.

For basic DOM manipulation, AJAX calls, and CSS styling, jQuery is still more than adequate. But forward-looking projects in a large company won’t make extensive use of this old library. In the end, it depends on whether you’re a hobbyist or professional and which type of website you’re designing.

For now, I’d say jQuery is a neat little tool to have in your inventory of web development skills. Not like it takes much time to learn anyways, provided you already know JavaScript.

5 Most Common Alternatives to jQuery

If you want basic DOM manipulation, Cash offers many jQuery features in a much smaller package that measures just 8KB. It makes your pages load faster, and the syntax is similar to jQuery. Cash doesn’t support older browsers, so that’s something to keep in mind.

React is a component-oriented JavaScript library that uses its own virtual DOM. Performance and scalability are a lot better than jQuery. React is optimized for reusability and easier debugging.

Much like Cash, this is a slimmed-down alternative to jQuery that takes less file space and uses a similar syntax. Anyone who knows jQuery can immediately start using Zepto, without losing access to most of the important DOM manipulation functions. Zepto is particularly good for mobile browsers, as that was one of the focal points during its original development.

jQuery covers a wide range of functions from DOM traversal to CSS styling and AJAX calls. UmbrellaJS focuses primarily on DOM manipulation and interactive events. It’s only 3KB in size, which makes it the smallest jQuery alternative on this list (and ideal for mobile browsers).

A TypeScript-based framework designed for both desktop and mobile web applications. This is different from AngularJS, which is based on JavaScript. Angular supports dependency injection, two-way data binding, and declarative templates- all optimized for single-page applications.

jQuery still has a lot of advantages, the biggest being a simplified syntax that is easily readable. You can use CSS selectors for DOM traversal. You can chain selectors with methods and attributes, executing several jobs with just one line of code.

Plus, there’s a ton of animation and AJAX functionality built into jQuery. To top it all off, it’s compatible with every browser out there and any developer can learn how to use jQuery within a couple of days. Of course, jQuery does have its limitations regarding scalability and flexibility- that’s why we have tools like Angular and React.