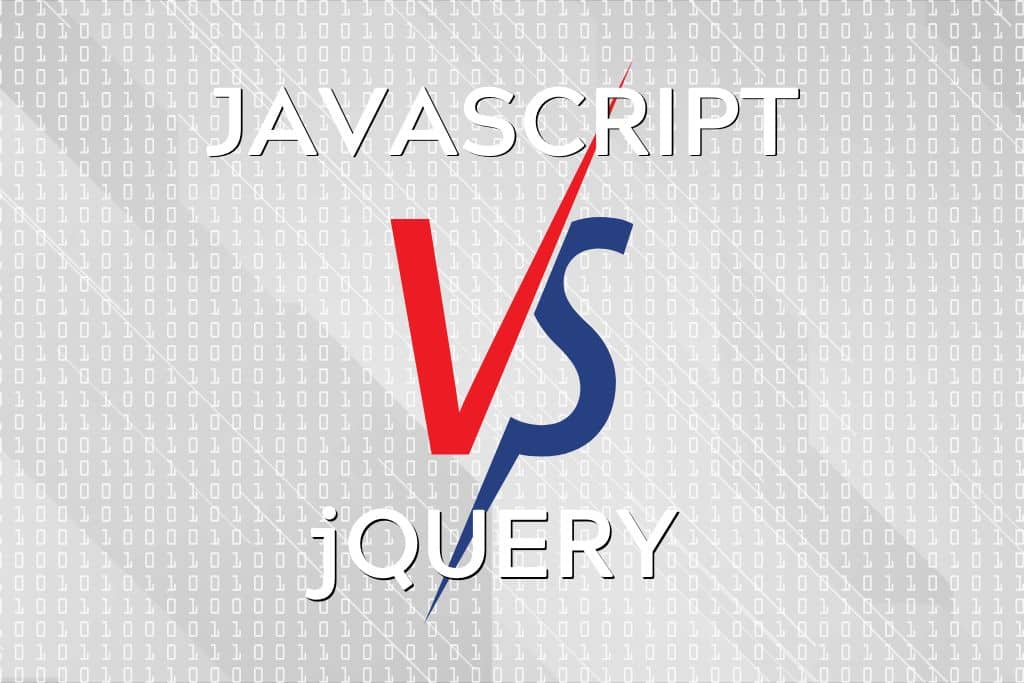 JavaScript is a programming language, and jQuery is a JavaScript library that’s used by over 80% of the world’s top 1 million websites. An easier way to think about this relationship is that JavaScript forms the basis for jQuery, which itself is a simplified means to solve problems with JavaScript. Both are essential tools for developing interactive web pages and applications.

The JavaScript vs jQuery debate has been raging on the internet for quite some time. But what is the difference? For starters, they are two completely different things- JavaScript is a language based on ECMAScript standards while jQuery is a library of predefined methods, functions, etc. written in JavaScript. jQuery was written specifically to simplify the process of DOM manipulation, with some additional features for animations and AJAX requests.

As to how both of these things interact within a browser, it’s quite simple- jQuery is downloaded from a server and interpreted by the browser as regular JavaScript code. It helps you select and modify elements within the DOM tree with significantly less code than you would otherwise need in native JavaScript. However, JavaScript does have its advantages in terms of performance and security- plus it forms the basis of all modern web application frameworks.

Have you ever been to a webpage and wondered how all the fancy tech actually works behind the scenes? Interactive menus, widgets, pop-ups, forms, bars, charts, etc. are common elements of modern web design. And we seem to take them for granted.

When the world wide web was initially created in the 1990s, a web page was little more than static information. You would visit a page, read its text, maybe click a hyperlink, and leave. But it all changed quickly, thanks to a certain person called Brendan Eich who came up with JavaScript in 1995.

JavaScript version 1.0 was originally developed for the Netscape 2 web browser. Netscape itself was a successor to Mosaic, the world’s first GUI-based browser. Early web developers were looking for a way to make their pages more interactive, and the Netscape corporation came up with two separate plans.

Related Post
If you are interested in more comparisons between Javascript, check out my other article JavaScript vs Ajax What Is The Difference?

First, they teamed up with Sun Microsystems to embed Java within their browser. Then, they hired Brendan Eich to integrate the Scheme language into Netscape Navigator. Eventually, an entirely new language was created with syntax based on Java- and it was also interpreted like Java (as opposed to being compiled and run as machine code).

Despite its name, JavaScript has very little in common with Java the programming language. The inclusion of “Java” was more of a marketing decision to boost popularity in its early phases. Soon, Microsoft released Internet Explorer and reverse-engineered their own version of the Netscape interpreter.

These days, JavaScript functions very differently from its original form. Most browsers use what’s known as a JIT (Just-In-Time) compiler. This compiler reads the script and converts it into a binary format that’s closer to machine code during runtime for improved performance.

Earlier, I mentioned that jQuery is a JavaScript library. But what does that mean, if you’re someone who isn’t very familiar with coding and its concepts? Basically, a library is a collection of prewritten code that you “call” or reference while writing a program/ script.

Libraries contain reusable code with proper documentation and can be written by someone else (you simply import them into your own code). Hence, you don’t have to write the solution to a problem from scratch- you just reference a method or function from the existing library. And that’s exactly why people use jQuery because it reduces several lines of native JavaScript code down to just a few lines of jQuery code.

The jQuery syntax itself is more “human-friendly” and easier to understand. The core of jQuery contains several methods for DOM traversal, while other parts of jQuery contain features for AJAX and animations. jQuery lets you chain multiple functions together for brevity and use shorthand function names.

Developed by John Resig, jQuery version 1 was released in August of 2006. Its goal was to simplify the task of developing interactive web pages with JavaScript. Another huge accomplishment of jQuery was making cross-browser compatibility much better in a time when people still cared about Internet Explorer (RIP).

JavaScript is a powerful web-development technology that can be implemented on every level of the stack- both in the frontend and backend. With the help of Node, JavaScript can run outside a browser, executing scripts for the successful transfer of data between client and server. It can even be used to develop entire applications for mobile devices.

jQuery’s most prominent use is on the frontend to execute DOM manipulations, i.e. modifying or adding/ removing nodes on the tree. You can also use it for basic animations like movement, transitions, fade effects, etc. And finally, jQuery can make AJAX calls to help update parts of the page with server data without reloading the entire thing.

In my comparison table, I mentioned how jQuery reduces the amount of code you have to write for a given task. That’s because it’s a library maintained by the jQuery team who write scripts for specific actions that you just have to call in your program. It would be like instructing a junior chef in a restaurant on how to make a steak.

Related Post
Here is another comparison between Javascript Javascript VS Java What Is The Difference?

jQuery can take 5 lines of JavaScript and compress them into a single chain of functions that fit into one line. However, since it’s a predefined set of features you can’t do very detailed “custom work” on your projects. Sometimes, you just need to use JavaScript for writing your own reusable functions and methods that suit your particular use case.

Each browser has its own JavaScript engine which decides how the code is interpreted. Back in the day when browser compliance with ECMA standards varied a lot, jQuery was the go-to solution. Methods within jQuery will run the same irrespective of browser (provided JavaScript is enabled).

But these days, browsers have become a lot better at adhering to standards. And the dreaded Internet Explorer is gone (although a few million still use it worldwide). For the most part, jQuery has a good reputation for working across all browsers- more so than native JavaScript.

However, there are no guarantees like with all things in programming. And while jQuery supports everything from Firefox to Opera, its latest version doesn’t actively support old browsers. Meaning, that the latest jQuery code isn’t tested and patched for old browsers.

While jQuery is indeed JavaScript it actually runs slower than native JS code, simply because of how it’s implemented. jQuery DOM access involves certain overheads that aren’t present with native JavaScript (how jQuery objects are created and implemented). Animations within jQuery aren’t very well optimized, and can eat up quite a bit of CPU time- this is especially noticeable on phones and older PCs.

Mobile browsers also have to download the jQuery library, which is why simplified alternatives such as Cash and Zepto exist. If you want to speed up animations, you can use CSS instead of relying on jQuery alone. To make a long story short, the native JavaScript code is usually faster than jQuery.

Comparing The Ease Of Learning

JavaScript is the fundamental technology upon which most modern web development frameworks are built. If you’re going to learn stuff such as Angular, Vue, React, etc. you better have a good understanding of JavaScript. The same applies with relation to jQuery since it’s just a collection of prewritten JS code.

However, you don’t need to be fluent in JavaScript to start using jQuery. You can pick up jQuery within a couple of days with a very rudimentary understanding of its parent language. However, be careful because using jQuery as a crutch will bloat your website and make it much harder for you to learn actual JS in the future.

For creating engaging interactive sites as a beginner, nothing beats jQuery. Even seasoned web development professionals turn to jQuery for many of their projects. However, you can’t consider jQuery a replacement for actual JavaScript just because it simplifies DOM manipulation.

JavaScript is much more flexible, and integrates into several web development frameworks like Angular, Vue, React, etc. It is also faster than jQuery, at the expense of increased development time. In the end, both have their respective pros and cons.