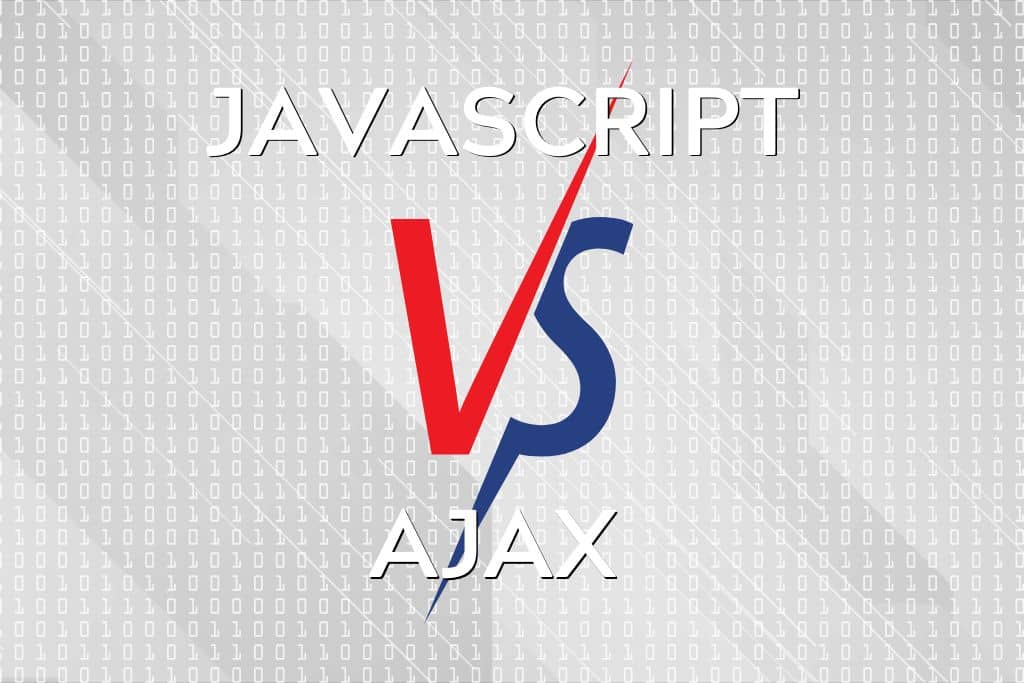 Many people often get confused by the differences between JavaScript and AJAX. Because both these technologies overlap in many key sectors of both frontend and backend web development. One is a programming language, while the other is a set of technologies designed for servers to communicate and share data effectively with webpages/ web applications.

Alright, so talking about JavaScript vs Ajax- what is the difference? JavaScript is an ECMAScript-compliant programming language designed to create interactive webpages and applications, it works alongside other technologies such as HTML and CSS. AJAX is more like a framework, consisting of many layers including JavaScript that are designed to exchange data asynchronously between the front and backend.

It isn’t a direct comparison, because both of these tools are intended to be used in very different situations (but often in coordination with each other). Asynchronous data updates simply mean that the server can update parts of a page with information in real-time without refreshing the whole thing. This is crucial for modern applications like live chat, video streaming, photo galleries, interactive forms, etc.

Depending on which source you refer to, JavaScript is within the top 3 programming languages being used right now- in conjunction with Python and Java. Python rapidly gained popularity due to its use in machine learning and data science (plus it has a vast collection of excellent libraries). But what exactly made JavaScript so popular?

After all, in the old days, people didn’t even consider JavaScript to be a “real” programming language. They said it was a toy language, intended for scripting kiddie applications and webpages. That it couldn’t be employed for any serious work.

Related Post
You can check out more compression of Javascript in my other article JavaScript vs jQuery What Is The Difference?

A lot has changed over the years, including how JavaScript is interpreted by browsers. The invention of JIT (Just-In-Time) compilers and new features has made this language much more powerful. Plus, it can be used to develop everything from web applications to games.

But JavaScript had really humble beginnings. It was originally conceived in 1995 by Brendan Eich who was hired by Netscape to make a scripting language for their Navigator 2 browser. Believe it or not, Eich came up with the initial version of JavaScript in just 10 days.

What made JavaScript different was that it wasn’t compiled before runtime. Instead, it was interpreted directly within the browser and gave developers control over all elements of the webpage. And guess what- the “Java” in the name was just added on for marketing purposes because Java was the hot new thing back then.

An acronym for “asynchronous JavaScript and XML”, AJAX is a set of technologies rather than a single language. To fully understand the significance of AJAX on web design, we’ll have to take a trip back into the 1990s. Back when the world wide web was still in its nascent stage but expanding into new horizons at a rapid pace.

If you entered some data into the page, it would have to reload completely in order to display new information. This was quite inconvenient for the user considering dial-up internet speeds of the time (especially with pages that contained images). Sending the entire page back and forth was not an efficient means of updating data.

But Microsoft had something interesting brewing behind the scenes. You see, their Outlook email app was using a version of the Java Virtual Machine built into Windows. But Sun Microsystems sued them for not complying with standards, and Microsoft quickly ditched this technology.

Related Post
Here is another Javascript comparison Javascript VS Java What Is The Difference?

They still needed some way to help data load asynchronously into Outlook, so a JavaScript function called XMLHttpRequest was created for Internet Explorer 5 in 1999. With this, you could now update parts of the page without reloading everything. The function was initially designed just for Outlook’s web page.

But rival browsers quickly started copying this function. And to this day, XMLHttpRequest forms the core of AJAX. It was the key reason behind the success of many early web apps such as Google Mail and Google Maps.

Initially, the XMLHttpRequest function made a “call” to the web server which then sent back data in XML. Nowadays, this data can be returned in several formats- JSON, text, HTML, etc. And thanks to this little innovation, web applications became a thing.

We wouldn’t have basic stuff like maps, chats, comment sections, mail apps, etc. without AJAX. The name itself was first used by James Garrett of Adaptive Path in 2005. He based it on a set of JavaScript web development standards being followed at Google.

What Is JavaScript Made From?

Alright, let’s get one thing out of the way- JavaScript itself isn’t “written” in anything, it’s merely a scripted language based on a set of standards. These standards are defined by ECMAScript. They tell you that JavaScript is a high-level, dynamically typed, prototype-based language with garbage collection.

It is merely a script based on a predefined syntax, that is interpreted by the JavaScript engine of a browser. Now, the engine itself is usually written in a low-level language like C that’s “closer to the metal”, so to speak. And each interpreter has its own way of turning JavaScript into machine code that can be interpreted by a processor.

For example, the Chrome V8 engine uses a type of JIT interpreter which compiles the JavaScript code line-by-line during runtime. Each JS engine follows the standards set by ECMAScript to different degrees of compliance. That’s why the exact same JS code can behave differently depending on which browser you use.

What Is AJAX Made From?

When James Garrett first coined the abbreviation “AJAX”, he detailed a list of technologies that comprised the final framework. First, you have the XMLHttpRequest object at its core which is responsible for asynchronous communication and data exchange with the server. Modern browsers have alternatives other than this.

Then, there’s XML itself which acts as a format for sending data back from the server (again, this has changed in modern times to include a wide range of formats). The DOM (document object model) interacts with JavaScript to organize the incoming data and update the webpage/ app. Finally, HTML and CSS are used for presentation and styling.

Keep in mind, that this is the original set of components detailed by Garrett when AJAX was first mentioned in public. A lot has changed since then. Everything from JSON to JavaScript can be used for transferring data, and browsers have their own AJAX engines that work in combination with the UI.

Comparing The Roles Of JavaScript And AJAX

Initially, JavaScript was conceived as a means to make interactive web pages. But its scope has increased significantly to include web applications, games, and even desktop apps. AJAX also had humble beginnings, as a means for Microsoft to asynchronously update their Outlook web app.

Now, AJAX is used for everything that requires real-time data updates from the server. Even something as simple as the autocomplete function within a search bar can’t be done without AJAX.

Granted, there are new methods for accomplishing the same tasks- like Fetch API. But AJAX itself is more of a methodology rather than a well-defined framework or language.

Comparing How JavaScript And AJAX Work

They often work in conjunction with each other. Let’s say you have a button on your clothing website that causes a selection menu to drop down. In order for the click to register, there’s a JavaScript function that picks up your input.

This is then used to trigger an AJAX request which goes to the server. The server then runs its own scripts (could be JavaScript in Node) to scan through the database, looking for the latest set of apparel in the category you selected. Then, this info is packaged as one of many formats (JSON, XML, etc.) and sent back to the browser.

The info is then unpacked, and displayed via a combination of HTML and CSS. As you can see, JavaScript mostly handles the frontend tasks while AJAX is used to communicate with the backend. But they are both working together to make your interactive site function as intended.

Comparing The Ease Of Learning

JavaScript syntax was purposefully modeled after Java and C, so it would be familiar to existing developers. Yet, it’s a totally unique multi-paradigm language with features that separate it from both of the aforementioned languages. You can learn JavaScript itself within a few months.

But learning how to apply it in conjunction with frameworks and libraries such as jQuery, React, Angular, etc. will take a lot more time. And AJAX isn’t a language, but a technique/ model that defines how you should apply various technologies such as JavaScript, XML, HTML, CSS, etc. Thus, you’ll have to learn all of that stuff in order to master AJAX.

As I explained earlier, JavaScript is a high-level language that must be interpreted by the JS engine within a browser. Different browsers have their own engines, with varying degrees of compliance with ECMAScript specifications. Hence, they tend to interpret the same code in slightly different ways which can cause parts of your JS script to not work on certain browsers.

AJAX, on the other hand, is a methodology to exchange data asynchronously between browsers. At its core is the XMLHttpRequest object, but different browsers have their own techniques to create this object. Legacy IE browsers use the ActiveXObject, but other than that any browser which uses XMLHttpRequest will work just fine with AJAX.

I hope this article gives you some perspective on the unique roles played by JavaScript and AJAX in modern web development. They aren’t rivals but part of one big ecosystem, covering the entire development stack. JavaScript works with, and exists within AJAX- plus both have evolved significantly since their original inception.

JavaScript is mostly used for client-side tasks, although it can also be run on the server via Node. AJAX is primarily a backend tool, used to exchange data asynchronously with the client machine. When JavaScript is disabled, AJAX can’t run either.